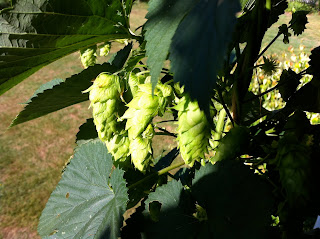 With the first round of the Single Hop Brewing Experiment going so well, the Rhode Island Fermentation Technicians (RIFT) decided to do a second round. As before, we would all brew the same Pale Ale that we used in the first round, but each of us would use a different hop. These would be single hop brews; one hop varietal would be used for bittering, flavor, aroma, and dry hopping. The goal was to allow the club to taste the differences between individual hops and learn some things about how they perform at the different stages of the boil or fermentation.

The volume of hops used for bittering would vary for each brewer, so that they each would end up with the same number of International Bittering Units (IBUs). There would be fixed amounts of hop used at the 15 minute flavor (.5 ounces per 5 gallons), 1 minute aroma (.5 ounces) and dry hopping (1 ounce) additions.
Here’s the run down on which hops were used in Round 2, with the typical alpha acid range for the hop and the brewer:
It should be noted that the first round had a number of classic American hops, a large number of which were fairly low in alpha acids. This round included some lesser known hops and alpha acids were generally higher than the last round. As before, we decided to taste these in ascending order of alpha acid strength, to reduce any risk of blowing out our taste buds. Here are the tasting notes from the June 2010 RIFT meeting.
Sterling
Very clean, with spice and clove in the nose. It contributed to a “malty nose”. This was thought to be good in Belgians and Wits.
Mt. Rainier
Notes of clove, anise, licorice, and a minty flavor.
Premient
Strong complex nose. Metallic, grassiness, lemon citrus, grapefruit. Would be good in a copper ale.
Centennial
This is a brew from the first round, brought back for comparison. Citrus, lemon, dry grapefruit, smooth, piney.
Sorachi Ace
Phenolic, cat urine, pine sol. Raw hop, green hop. Smooth bitterness. This was a bit of a surprise, as we did not detect any of the “lemon” character that this hop is supposed to have. It is also a surprise after tasting Brooklyn’s Brewery’s Saison that features this hop and has a completely different character. This is a hop that needs to be carefully integrated into a brew.
Chinook
Papaya, fruit. Strong nose of grapefruit. Bready, yeasty. Classic American “Big C” hop for bittering.
Simcoe
Piney, papaya. Tangy, fruity, smoother than Summit. Similar to Roxy Rolles.
CTZ
The Columbus/Tomahawk/Zeus offspring. Ok, John cheated a little bit here, deviating from the base recipe to make a darker, maltier, better integrated Pale Ale. That being said…
Flavors: Candy cigarettes, neutral, clean, malty, earthy. Very tasty.
Stuff we learned:
Don’t assign Citra to someone who isn’t going to show up!   😉